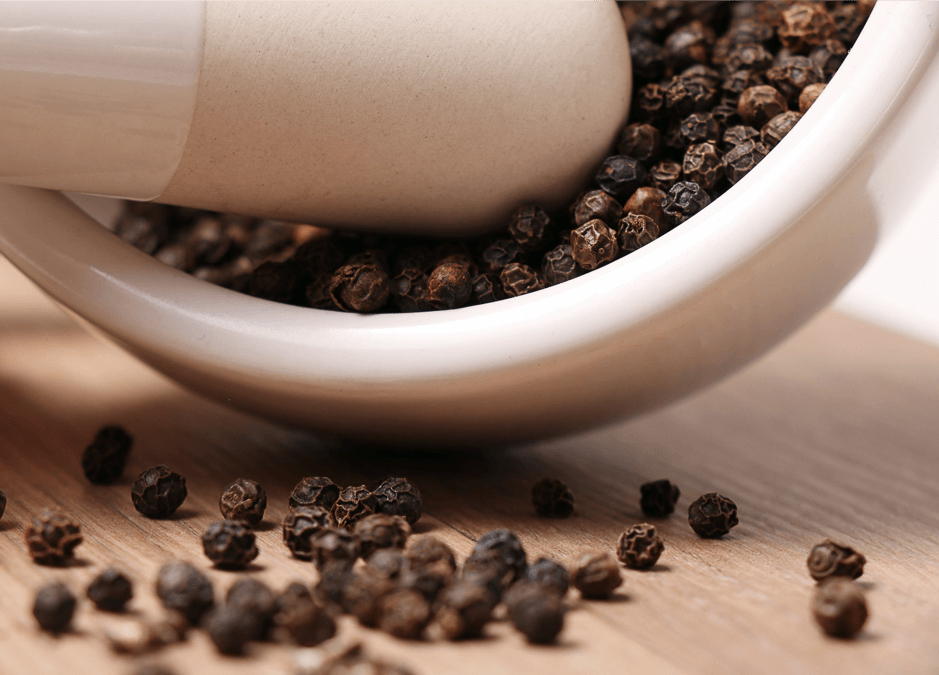 Rotundone is an aroma compound with a flavour described as “strong”, “spicy” and “peppercorn” and is responsible for black or white pepper flavour in Shiraz wines1. The compound itself is a sesquiterpene and chemically related to monoterpenes (found in floral varieties). At high concentrations, the odour of rotundone is described as “harsh”, “burnt” and “balsamic”1,2.

The perception of rotundone in grapes and wine

Rotundone is already present in its aromatic form in the grapes and is not released during fermentation like many other aromatic compounds typically found in wine. The concentration of rotundone is at its highest when the grapes are considered ripe, however, the level in the finished wine is typically significantly lower than what is measured in the grapes, probably due to extraction and winemaking protocols employed (see Part 2)3.

In wine and water, the sensory perception threshold of rotundone is 16 and 8 ng/L respectively1. Shiraz wine with around 20 ng/L rotundone could be identified as moderate pepper aroma intensity by trained sensory panel, while 75 ng/L would be considered as high intensity1. If present at significant concentrations, rotundone can easily be tasted in the berry, however, interestingly around 20% of the population are unable to perceive the peppery aroma brought by rotundone4. A study evaluating a range of Shiraz wines reported that some panellists were completely unable to smell rotundone at concentrations typically found in red wine. Moreover, even elevated levels of rotundone in water (up to 4000 ng/L, several orders of magnitude above the odour detection threshold), were not perceived by insensitive tasters1. The variation in individual sensitivity to rotundone suggests that the way wine is assessed by consumers or wine judges could vary substantially from one person to another.

Rotundone is widespread in nature and is a key aroma component of several herbs and spices, especially white and black pepper, nutgrass, marjoram and rosemary. Compared to wine, rotundone is present at much higher concentrations in especially black and white peppercorns where it is present at 10 000 times the level found in very “peppery” wine1.

A survey of 137 commercially available Australian red wines1 was done and results showed that of all the wines containing rotundone (19% of the sample set), 62% were Shiraz1, confirming the importance of this compound in Shiraz’ varietal character. Elevated levels of rotundone were also observed in varieties such as Mourvèdre (134 ng/L) and Durif (128 ng/L),1,4 while Cabernet Sauvignon contained much less (0-20 ng/L).

Rotundone starts to accumulate in the berry from the onset of vériason3 and the concentrations are initially very low (typically below 5 pg/berry) and remained low until well after vériason. Significant increases are only observed close to harvest (last six weeks of ripening)5.

The concentration of rotundone in ripe Shiraz grapes (from Australian vineyards known for producing “peppery” wines) ranged from 10 to 620 ng/kg of grapes1. Sensory panellists also reported that the wines containing higher concentrations of rotundone showcased a higher aromatic intensity of the peppery aroma showing a positive correlation between the compound concentration and aroma intensity (which is not the case for many other aroma compounds)1.

In general, cooler ripening and limited bunch exposure appear to favour the synthesis and/or accumulation of rotundone. Exposing the bunches to sunlight by altering the canopy will reduce the concentration of rotundone in the berry and studies have shown that leaf removal from the fruit zone at vériason could result in significant decreases (between 50 and 70%) compared to vines where no leaves were removed.6 Bunch thinning (40%) at mid-vériason showed little effect on the rotundone concentration of cv. Duras.6

Within a bunch, the rotundone concentration seems to be higher in the top section compared to the bottom section of the bunch. Other than that, the parts of the bunch that was exposed to sunlight (the part facing away from the canopy) had lower concentrations of rotundone compared to the part of the bunch facing towards the canopy (and thus protected from sunlight)7. Selective harvesting can thus be employed to specifically select bunches that ripened in conditions protected from sunlight exposure.

The researchers attempted to correlate the “pepper-map” with data from the topography, soil chemistry and vine vigour8. Results suggested that there was no link between vine vigour and soil moisture. However, a negative correlation between rotundone and the bulk electrical soil conductivity was reported while the southerly aspect of the vineyard also seemed to play an important role. Higher precipitation was also associated with elevated levels of rotundone and irrigation has been proven as an effective technique to increase rotundone concentration in the resulting wine9. Within the block, it was also evident that the vines subjected to less light and/or cooler temperatures had the highest concentration of rotundone.

Table 1. The concentration of rotundone (ng/kg) in Shiraz grapes from six Australian vineyards over two vintages1 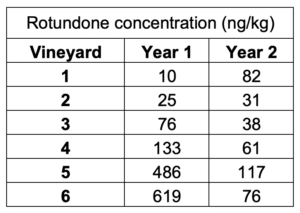 It is evident that vineyards that experience the coolest conditions over the growing season with sun-protected grapes are most likely to produce more rotundone. Other than these two main drivers, other factors such as aspect, soil composition and canopy architecture all play a role in rotundone biosynthesis/accumulation.

It would be valuable for the South African industry to investigate ways in which vineyard practices can be adjusted to optimise levels and ultimately how winemakers can use rotundone as an important aroma note in South African Shiraz wines.

Photo by Sonja Punz on Unsplash

Staying up to date with the latest developments in wine science is a necessity in the modern wine world. Dr Carien Coetzee (PhDAgric Oenology) aims to ensure that the most recent relevant scientific information can be transformed into action by writing regular technical blog posts for ShirazSA.